On the occasion of the 40th day after death of Ara Boyajian, Former Chairperson of the Diocesan Council

Today marks the 40th day after the death of Mr. Ara Boyajian – honest and dedicated spiritual son of the Mother See of Holy Etchmiadzin. For many decades, Mr. Boyajian has served the Armenian Diocese of Canada and the community in Toronto.

Mr. Boyajian was born in Beirut, Lebanon in 1952. He attended Sahag Mesrobian elementary school and Hovagimian Manougian secondary schools. He received a Bachelor’s Degree in Physics with distinction and in 1973 moved to Montreal to do graduate work at McGill University in Electrical Engineering. He graduated with distinction and received the McConnell award for his academic excellence. In 1976 he moved to Toronto, where he partnered up with his brother and established real estate development companies.

He married Calabrina D’Ascenzo in 1985 and were blessed with three children; Talar, Garen and Sarmen and his first grandchild Arto.

Since 1981, he has been a Board member of Nor Serount Cultural Association, founding member of the Toronto chapter of the Social Democrat Hunchagian Party, an active member of the AGBU, and a friend and supporter of the Zoryan Institute.

He has served the Holy Trinity Armenian Church since 1982 as Parish Council member, Diocesan Delegate, Chairman of the Building Committee of the newly built Church, Chairman of the Cemetery Committee and as a Sunday School teacher.

He has been a founding member of the Canadian Armenian Business Council (CABC) of Toronto. In May 1988 he was elected a member of the Board of Directors, and the first Vice-Chairman of CABC.

In 1991 he received an encyclical from the late Vazken I, Catholicos of All-Armenians, and was awarded the St. Gregory the Illuminator Medal for his services to the Armenian Church and to the Holy See of Etchmiadzin.

He has also been acknowledged by the late Vehapar Vazken I, as a Benefactor to the Holy See of Etchmiadzin.

He was a founding member of the Toronto Chapter of the All-Armenian Fund, established in 1993, serving as the Treasurer until 2011.

In 2002 he has been acknowledged and awarded the “Medal of Recognition” by the President of Armenia Robert Kocharian for his contributions to Armenia and Karabagh, and for his services to the All-Armenian Fund. On March 20, 2010, President of Artsakh Bako Sahakyan signed an executive order granting him the “Medal of Gratitude”. As a member of the Hayastan All-Armenian Fund Board of Trustees, the Medal was bestowed to him in recognition of his longtime contribution to the economic and infrastructure development of Artsakh.

Aside from his community achievements, Mr. Boyajian was a man of integrity and strong determination who excelled in everything he was involved in. He was most analytical and logic drove his decision-making process. Ara had a very sharp mind and liked to lead and champion issues that he believed in.

Mr. Boyajian’s death is an irreparable loss for the Armenian Diocese, Clergymen, Diocesan Council, and the entire community.

We pray that the Lord, in His love and mercy, will receive the soul of the deceased and grant him eternal peace and tranquility.

Governing Board Meetings of the Canadian Council of Churches 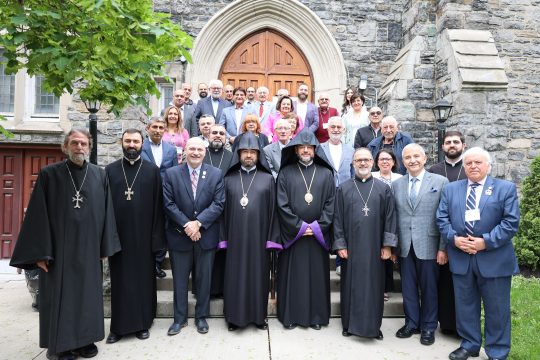 Catholicos of All Armenians hosted the Delegation led by the Honourable Stéphane Dion, the Special Envoy of Canada